To Listen Objectively to the Howl of a Wolf

Howls are arguably the most conspicuous wolf vocalizations. Functions attributed to howling often involve some sort of communication among individuals belonging to the same pack. For example, it has been proposed that howls can serve to reunite pack mates in situations where they have been separated. Howls can also be used as territorial displays, conveying information about pack location and minimizing contact between different packs. Given these proposed functions, we predict that howls are ideally suited to serve as signals allowing individual recognition. In fact, it has been shown that howls contain information on individual identity. The acoustic structure of wolf howls allows us to identify individuals, and wolves could use this information for individual recognition. Variables related to fundamental frequency (mean and maximum) and coefficient of fundamental modulation are the variables that best discriminate individuals. Frequency characteristics usually encode individuality since they are mostly determined by the characteristics of an animal’s vocal apparatus. Frequency modulation also plays an important role in individual recognition as reported in ground squirrel chirps, bottlenose dolphin whistles, and calls of subantartic fur seal pups. Transmission characteristics of the atmosphere impose constraints on acoustic communication, and frequency modulation represents one of the best ways to encode information in long-range vocal signals. Whereas fundamental frequency is highly determined by morphological characteristics, acoustic features related to the shape of the spectrum (e.g. frequency modulation) are determined by details of the opening and closing movement of the vocal folds. Morphological characteristics of the vocal apparatus and the development of an individually specific howling technique could be the basis for individual recognition by means of howling in wolves, as it has been suggested for coyote.

Nevertheless, the fact that acoustic structure of howls is individually specific does not imply that wolves use this information for individual recognition. The results of playback experiments provided the first evidence that wolves can discriminate among howls according to their acoustic structure. Furthermore, the response to unfamiliar howls emitted by a familiar wolf decreased across trials following a habituation pattern. However, repeated exposure to equally unfamiliar howls emitted by unfamiliar wolves did not result in habituation, and was more intense for wolves emitting howls that differed in the coefficient of frequency modulation with respect to the familiar howls. Although there is a strong basis for predicting that many species may be able to discriminate between individuals, to determine empirically whether animals are able to identify individuals and which cues they use to do so is difficult. However, individual recognition is a more complex cognitive capacity than just discrimination, requiring the matching of a specific stimuli with an internally-held template or “representation” of that individual. Additional experiments may provide crucial insights to understand the role of acoustic communication in wolf’s recognition.

Vocalisation structure and unveiling functional aspects of wolf's vocalisations such as individual recognition are the main objective of IWRT's member Vicente Palacios PhD. thesis. Learn more about Vicente's research at: 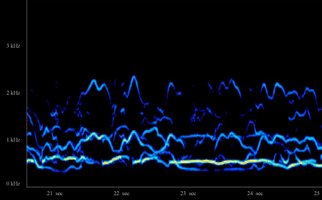